Rome Meeting Among The Representatives Of The Emblematic Communities Of The Mediterranean Diet, Held On March 9, 2015 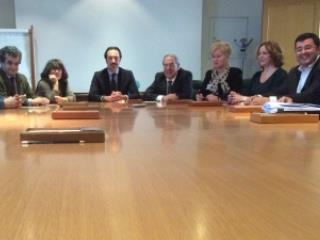 The mayor of Pollica, Mr. Stefano Pisani made a brief introduction about the importance of the Mediterranean Diet network established by the emblematic communities through the Charter of Chefchaouen on the 16th of March 2010. Then he informed the participants that the EGTC (European Grouping of Territorial Cooperation) has been approved by the Italian Presidency of Council of Ministers, legitimating the International Grouping at European level.

The president of the KIP International School, Mr. Luciano Carrino, explained the organization of the Pavilion EXPO 2015. The Emblematic Communities Network through Pollica is operating as partner of the Pavilion and thus it will have free spaces available for 23 days. The KIP pavilion will be a unique stand, not linked to the public sector or to the private, but it will promote local realities which have as a common goal the sustainable and local development. He showed the pavilion planimetry and he explained in details its structure and the purpose of each of the 4 buildings that composes it. The pavilion, located at the entry of the EXPO 2015 will be the place where the Emblematic Communities can present themselves, in the most appropriate way -video, pictures, cultural and musical events. Moreover, there will be an additional space at the disposal of the Communities in case they need it for conferences and meetings, with a capacity up to 600 people.

After a brief discussion, the participants declared their intention to participate in the Expo 2015 and presented their proposals for joint participation in the KIP Pavilion. The Mayor of Pollica pledged to send as soon as possible a timetable. Thus, each Emblematic Community will have the chance to fill in the appropriate activities to present itself.

Finally, the Mayor of Pollica presented the procedures and deadlines that must be followed in order to finalize the establishment of the EGTC. For this reason, asked the representatives of the Emblematic Communities to go to Pollica on April 24, 2015 to sign the final agreement of the EGTC.