Presentation Of Scholarly Book On Venetian Sources About Koroni And Methoni

The Maniatakeion Foundation, in cooperation with the Institute for Byzantine Studies of the National Research Foundation and the Municipalities of Koroni and Methoni hosted the presentation of Professor Andrea Nanetti’s latest book Koroni and Methoni Documents: Research and Critique on the Eyes of the Venetian Commonwealth in the 14th and 15th Centuries (Vol. 2).

The book, 744 pages long, is an annotated collection of official and other documents from that period. These documents are mostly located in the Archives of Venice and they provide a wealth of information about daily life in Koroni and Methoni under Venetian rule. Much of this information is being made more easily accessible to scholars for the first time.

The event was introduced by Mr. Dimitris Maniatakis, Chairman of the Maniatakeion Foundation, Mrs. Barbara Marengo Scarante, a journalist (and the wife of the Italian Ambassador in Athens), Mr. Thodoris Salantis, Mayor of Koroni, and Mr. Heracles Michelis, Mayor of Methoni. Perspectives on the book and its times but also about the region were offered by the event’s main speakers, --the Metropolitan of Messinia, His Holiness Mr. Chrysostomos, Mr. Antonis Samaras, MP from Messinia, Mr. Dimitris Sioufas, President of the Hellenic Parliament, Mr. Taxiarchis Kollias, Professor at Athens University and Director of the Institute for Byzantine Studies at the National Research Foundation, and Mr. Andrea Nanetti, the author and a Professor of History at Bologna University.

Coordinator of the event was Professor Emmanuel Giannakoudakis of the Athens University of Economics and Business.

Mr. Maniatakis opened the presentation by welcoming everyone and stating the importance and difficulty of Dr. Nanetti’s work in preserving primary source material for future historians.Then he spoke about the geo-political and commercial importance of Koroni and Methoni at the time covered by the book.He continued by summarizing the vision, the mission, and the cultural, social, and economic goals of the Maniatakeion Foundation.He closed by remarking that the foundation’s activities were also a way for reaching out to people of Koroni descent and other friends of Koroni to encourage them to use their experience to benefit the town and its region.

Mrs. Marengo Scarante pointed out that she was speaking as a native of Venice and explained that Koroni and Methoni were called “the eyes of Venice” because their location allowed Venice to survey important sea-lanes. She spoke of her acquaintance with the author from having worked together, she expressed her appreciation to all who made the book possible, and she expressed her best wishes to Koroni and Methoni of today.

Mr. Salantis spoke about contemporary Koroni, about how grateful the city is to Professor Nanetti for publishing this fine volume, and invited all present to take part in a second Koroni and Messinian renaissance.

Mr. Michelis also extolled the importance of the book and thanked professor Nanetti. He drew parallels between medieval and ancient Methoni, and spoke briefly about breaks and discontinuities in its history that the book will help highlight.

His Holiness, Mr. Chrysostomos provided rich background about the operation and functions of the Church at the time examined by the book, focusing in the role of the clergy in the societies of Koroni and Methoni.He pointed out that clerics functioned in tandem with the notaries and contributed not only in the creation of the documents found in the volume, but also had created much of the conventions and juridical context for many of the events and transactions that have been recorded from that time.He ended his remarks by expressing the wish that Koroni and Methoni reestablish a role in the multicultural dialog of our time, as they once were the place were such a dialog took place between Byzantine Greeks and Venice.

Mr. Antonis Samaras dwelled on the importance of preserving primary sources for future historians as they can provide evidence for the practices of the past. He described the book as a labor of love and thanked Professor Nanetti for his contribution to regional and Greek history, pointing out that, in addition to its purely scholarly worth, the book was an invaluable bridge between the past and the present, an illustration of the continuity of Greek history and the Greek spirit.

Mr. Dimitris Sioufas also praised the book, the author, and the importance of historical research.However, he also reminisced about his long association with Mr. Maniatakis, including the time when he was Development Minister and Mr. Maniatakis was the Chairman of the Public Power Corporation. In this context, he praised the Maniatakeion Foundation and its founders and wished it would succeed in its endeavors.

Professor Kollias followed with a more extensive description of how primary sources are used by professional historians and expressed the hope that the hard work of the author would soon be exploited by other historians in the writing of scholarly secondary works and by other writers of all kinds.

The last speaker was the author, Professor Andrea Nanetti, a fluent Greek speaker. He placed the book in the context of a long-term research program, initiated in 1995, aiming to collect the documents created by Venetian notaries in Messinia in the period 1207-1500.In his remarks he thanked Professor Nikos Oikonomides and Mr. Nikos Panayiotakis of the Greek Institute of Byzantine and Post-Byzantine Studies in Venice. He acknowledged the support of Bologna University which allowed him to do research at the History and Documents Conservation Department of Ravenna University.Professor Nanetti ended his acknowledgements with thanks to Institute for Byzantine Studies at the National Research Foundation, and to the Maniatakeion Foundation, Mr. Maniatakis and Mrs. Tagonidi-Maniataki for their support in the publication of the book.

“Research”, where his closing words, “never ends. We are already well into the next installment.”

The Maniatakeion Foundation is a non-profit institution dedicated to cultural, social, and development activities for Koroni and the region and takes great pride in supporting events that showcase the region, bring together its diverse population, and invite more people to become familiar with its culture and beauty. 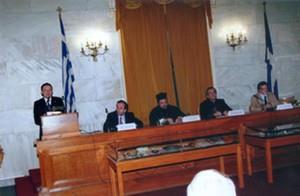 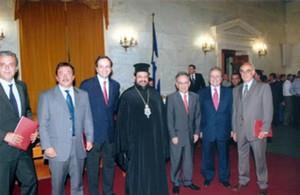