Where in Greece, about a week ago, one could have heard excerpts of a work by Fritz Kreissler, performed impromptu, by one of the world’s great violinists, on his Stradivarius, among the olive trees, under the moon, with a light breeze coming from the sea about a hundred meters away? This was in Koroni, the beautiful little Messinian town in Peloponissos, at the Maniatakis Grove, on August 10th. 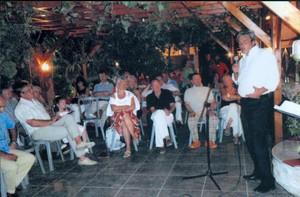 Lars Bjornkaer, concertmaster of the Royal Danish Orchestra since 1993, was there among several dozen international residents of Koroni, visiting his friend Leo Winland, first cello at the Royal Orchestra of Sweden. The two of them, joined by three more of their friends, had performed over the preceding few days a number of quintets and quartets in Koroni. Then, that evening they had come to the Grove to attend the Maniatakis Foundation informal “town hall” meeting and reception for longtime international residents and friends of the town.

The evening, naturally, was opened by Dimitris Maniatakis, Chairman and co-founder of the foundation, the retired former Chairman of the Public Power Corporation in Greece. Mr. Maniatakis and Mrs. Eleni Tagonidi Maniataki, (the Vice Chairman of the foundation), welcomed the guests, presented the Foundation’s mission and goals, and expressed the hope they would share with him and members of the Foundation Board who were also present their views and candid hopes and fears for Koroni. The Mayor of Koroni, Theodoros Salandis, also a Foundation Board member, was there too. Dennis Zacharopoulos, a management consultant by day and a member of the Foundation’s Advisory Board, acted as the moderator for the evening.

The guests, many of whom spend several months or even the entire year in Koroni, spoke of their affection for the town, its unspoiled character, the absence of mass tourism, and the warmth and friendliness of its people. It was easy to see what they like about Koroni. They were all very concerned that economic growth, which, they were quick to acknowledge, is a necessity for the region, not lead to the destruction of Koroni’s special qualities --as, they pointed out, has so often happened elsewhere in Greece.

The Mayor got a polite earful too. The issues which beset many other small towns in Greece, sewage treatment, waste management, traffic, the state of the port, and transportation, were mentioned briefly.

Closer to the Foundation’s mission, the guests brought up the need for space for cultural events to accommodate music and theatre performances, painting and photography shows, readings, lectures and seminars, and to host scholars or artists-in-residence. The other great recurring themes of the evening were environmental awareness and education for the community, and events taking advantage of the international and multicultural dimensions of the town, such as international food and dance fairs, perhaps a Koroni Festival. Examples of now things are done elsewhere mentioned the South of France and Japan.

Mr. Maniatakis and Mrs. Tagonidi Maniataki thanked the guests for their views and promised the Foundation would be working on such issues, in various ways. 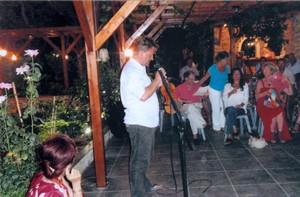 It was about then that the Stradivarius came out of its case. Afterwards, Lars even let the bravest guests touch it. It was a great end for evening. The guests, the Board members, and their friends then moved on to the mezethes and the great wine and had a perfect Greek night.

The Maniatakeion Foundation is a non profit institution dedicated to cultural, social, and development activities for Koroni and the region and takes great pride in supporting events that showcase the region, bring together its diverse population, and invite more people to become familiar with its culture and beauty.