On Thursday, July 30th, the Maniatakeion Foundation organized an International Workshop on the occasion of Kalamata's summer school visit to Koroni. The organizers of the event were the Pan-Messinian Federation of USA and Canada, the University of Peloponnese, the Technological Educational Institute of Peloponnese and others. 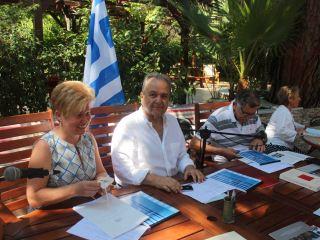 The purpose of the Workshop was to reinforce Greek culture to Greeks living abroad in their everyday experience by making them socialize and develop Greek consciousness in a totally Greek environment that would contribute to the culture, preservation and promotion of Hellenism in diaspora.

The Chairman of the Maniatakeion Foundation, Dimitris Maniatakis, welcomed the participants and stressed the importance of Greeks living abroad, especially during the period of Ottoman rule and their significant contribution to the economic, social, cultural and political development of the Greek world.

The President of the Pan-Messinian Federation, Theodore Tzalalis thanked the Maniatakeion Foundation for the organization and pointed out that the "Greek language" summer school has been running annually since 2005.

Pelagia Leftaki, Deputy Mayor of Pylos-Nestor, addressed a greeting and referred to the history of Koroni and the historical links between Greece and the Greeks of the Diaspora. 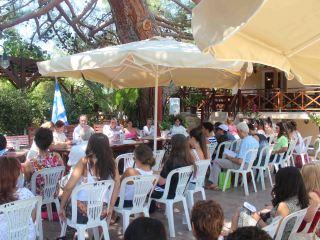 Eleni Tagonidi Maniataki, Vice Chairwoman of the Maniatakeion Foundation, in her speech on "The cultural heritage of Koroni as social and economic development agent" mentioned the comparative advantages of Koroni, namely: a) the cultural dimension of the Mediterranean Diet and its preservation as intangible cultural heritage of humanity and b) the castle of Koroni. She stressed that both these cultural assets can become "locomotives" as well as social and economic reconstruction catalysts.
Dimitris Velissariou, President of the TEI of Peloponnese referred to the comparative advantages of Messinian products and the worldwide renown Koroneiki olive. He stressed upon the link that tie the primary production to the TEI of Peloponnese.

Nicos Georgarakis and N. Demertzi presented their book entitled "The political portrait of Greece: crisis and the degradation of the statesman." The authors referred to the causes of the crisis, the feelings that were created and the psychosocial mechanisms through which these feelings led to forms of political action or inaction. N. Georgarakis talked about state clientelism carrying these roots way back to the Ottoman period, as for example the famous "Uncle in Koroni" (meaning strong connections) that reaches us up till today. 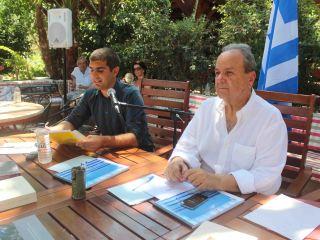 Dionysis Papadatos, representative of the Captain Vassilis Foundation, referred to the Foundation's activities on sustainable agricultural production in Messinia and its effort in supporting the identity of local products while enhancing their quality so as to connect them with the culture of the region and thus contributing to larger economic activity in the area.

Professor Panagiotis Niarchos in his speech entitled "Research on the existence of extra solar planets", focused on the existence of other planets in the universe and pointed out that there are approximately 30 (among over 1000 confirmed) extra solar planets baring many similarities to Earth, yet none is completely identical. Investigations continue and hopefully in a few years they will be able to answer the eternal question whether we are alone or not in the Universe.
Professor Constantine Niarchos analyzed the uniqueness of the Greek language from Homer until today and urged teachers and students to continue their quest for learning the Greek language which expresses and testifies Greek culture.

Dimitris Maniatakis, upon closing the seminar, urged the young men and women to maintain their contacts with Greece and expressed his conviction that if appropriate and responsible initiatives were taken, the crisis that befell Greece could be reversed, creating opportunities for growth and development.

The participants at the conference consequently enjoyed a historical tour round Koroni with Dimitris Kyriazis, economist and former President of the Cultural Association of Koroni.