Dimitris Maniatakis, Chairman of the Maniatakeion Foundation, was reelected as General Secretary of the Hellenic-African Chamber of Commerce at the general meeting held on Wednesday, December 16, 2014. A new Board of Directors, chaired by Sotiris Mousouri, former Deputy Secretary General UN was as well elected. 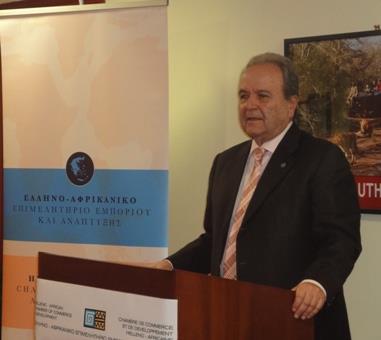 Dimitris Maniatakis referred to the aims and the work that the Chamber achieved during the period 2012-2014 and stressed on the scheduled activities planned for the coming three-year and related to business missions in African countries and conferences regarding investment opportunities in cooperation with the Central Union of Chambers of Greece as an opportunity for other bilateral Chambers to get acquainted with the work of the Greek-African Chamber and thus proceed to synergies.

He furthermore stressed that nowadays African economy is growing remarkably. Standard Chartered anticipates that within the next twenty yearseconomy in Africa will increase at an average annual rate of 7%, reversing the trend that has prevailed since 1975. This change is due to:

b) improvement of business environment

He stressed that "The purpose of the Greek-African Chamber of Commerce is to develop economic and trade relations between Greece and the countries of sub-Saharan Africa. In a global economy where virgin markets are now few, the challenge for penetration is great. Global economy is looking up for new markets for investment and export products and this is what we should all aim at. That is why the giants of the world economy such as the US, India and China arealready actively working in Africa. "