The Maniatakeion Foundation And The Department Of Economics Of The University Of Athens Organized A Workshop Entitled "Greece 2014: What Is Next After The Crisis?”

The workshop on "Greece 2014: What is next after the what crisis?" organized by the Maniatakeion Foundation and the Department of Economics at the University of Athens on Tuesday, June 10, 2014 at the packed auditorium "Drakopoulos John" of the National and Kapodistrian University of Athens was successfully realized. 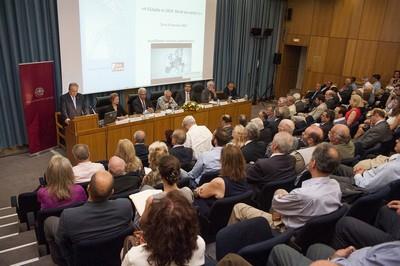 Dimitris Maniatakis, Chairman of the Maniatakeion Foundation in his opening greeting, noted inter alia, the following: "Development will eventually come if all of us start producing and creating value. We can overcome problems and pathologies through structural changes, meritocracy and evaluation systems of human resources. Thus we can retain skilled persons in our country. Otherwise, we shall only be able to manage perhaps, somehow better the situation of the country. Greece is entering in a new era, having successfully achieved: 1) Avoiding "Grexit". 2) Successful completion of the recapitalization of the banking system. 3) Primary surplus of our country, which according to Eurostat reaches 3.4 billion euros. 4) Greece's exit in international markets after four years.

George Mergos, Professor of Economics at the University of Athens, referred to the "visible exit” from the crisis, under conditions essential to the structural reforms in order to promote extrovert entrepreneurship and to smooth out the social impact caused by the crisis. Mr. Mergos furthermore pointed out the danger lurking ahead of retrogression. 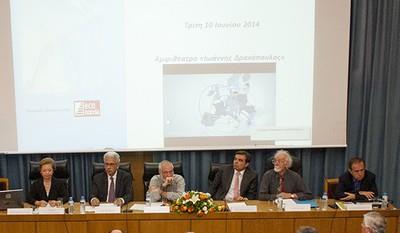 Margaritis Skhinas, Director and Head of the Athens Office of the Directorate General for Economic and Financial Affairs (DG ECFIN) of the European Commission expounded the roots of the crisis in Greece which were not purely European but mostly American. He focused on the weaknesses of the European Union that multiplied the crisis. He stressed that the economic union of Europe requires some form of political union. As for Greece, it must complete procedures for an effective reconstruction of the public sector, promotion of privatization and should establish conditions for development, so that if additional funding is required, the ensuing conditions will result from a joint decision of Greece and its creditors. 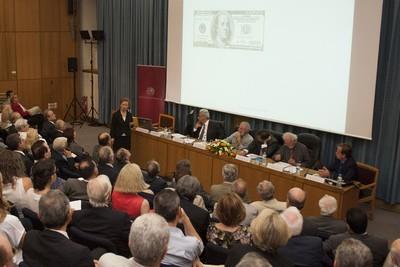 Dr. Siriwan Chutikamoltham, Professor at Nanyang Business School, in her speech entitled "Lessons from the Asian Financial Crisis", focused on similar causes of the Eurozone crisis with that of Asia in 1997. Primary route in both crises began with countries that lost competitiveness in production and exports, which eventually led to current account deficits and consequently required foreign borrowing, much of which was short-term debts. Some of the loans financed consumption or speculative investments. These countries experienced low growth potentials and lenders lost confidence in them. When the lenders recalled loans, it created panic resulting in massive capital outflows, credit revocation and naturally to bankruptcy, business closures and unemployment. The debt crisis turned into a banking crisis and eventually into a financial and economic crisis. Dr. Chutikamoltham emphasized that effective resolution of a crisis requires confronting the causes that led to it. Policy remedies providing liquidity, such as loose monetary policy can stop the panic and prevent further bankruptcy, but they still do not clear up the solvency problem. Even the expansionary fiscal policy can support the request to avoid a deeper recession but the loss of competitiveness is a problem that can be cured only by improving the productivity of the real economy. Austerity can help to some extent the systematic inefficiency, but at the cost of social discomfort. In the long term, however, austerity can cause even greater inefficiency. Productivity can be enhanced through reforms in the productive sector, by promoting enterprises that have competitive advantages and by closing unproductive ones. Confidence in the country can be restored with credible reforms which will result eventually in reducing excessive debts, increasing investment and in job creation.

Emeritus Professor of the University of Athens Panos Kazakos highlighted the institutional reforms that have been made in the European Union, however have raised doubts as to their effectiveness. He talked about looming ambivalent recovery and emphasized the issue of fiscal discipline over solidarity, leading to a crisis of legitimacy of the European project. Finally, he raised questions about the sustainability of EMU.

Panos Mourdoukoutas, Professor of Economics at Long Island University explained the practice of quantitative easing used by the Federal Bank of USA in order to deal with the financial crisis. He demonstrated the way in which the mechanism of liquidity prevents installation of the American economy in the range of "Japanisation", i.e. the long-term position in the economic conditions of low growth and high debt. Finally he marked out that someone in Europe is likely to see conditions such as "Japanisation" as a result of the European crisis.

Anthony Papagiannidis, General Director of the Group Economia coordinated the workshop, sealing it with his strong personality and prestige.