The Chairman of the Maniatakeion Foundation, Mr. Dimitris Maniatakis, gave a speech on ‘Greek Universities as powerful developmental poles & centres of creativity’ on Tuesday 26 January at the offices of the European Parliament in Athens on the occasion of the launch of Dr. Andreas N. Papastamou’s book ‘Prometheus Educated. European Universities and the challenges of the industrial age'. The book launch was also attended by Konstantinos Svolopoulos, Chairman of the Athens Academy, Kostis Hatzidakis, former Minister of Development, Nikos Markatos, former Rector of the National Technical University of Athens, and Vasilis Filias, former Rector of the Panteion University.

The Chairman of the Maniatakeion Foundation, Mr. Dimitris Maniatakis, gave a speech on ‘Greek Universities as powerful developmental poles & centres of creativity’ on Tuesday 26 January at the offices of the European Parliament in Athens on the occasion of the launch of Dr. Andreas N. Papastamou’s book ‘Prometheus Educated. European Universities and the challenges of the industrial age'. The book launch was also attended by Konstantinos Svolopoulos, Chairman of the Athens Academy, Kostis Hatzidakis, former Minister of Development, Nikos Markatos, former Rector of the National Technical University of Athens, and Vasilis Filias, former Rector of the Panteion University.

Mr. Maniatakis mentioned that the current financial crisis being faced by Greece is directly associated with an economic growth model which has become distorted and utterly outdated in the current globalised economy. If we do not change that ‘model’ in the decade 2010 to 2020 the crisis will intensify and there will be a constant rise in unemployment and more severe social problems will emerge.

If one compares the current situation with the period from 1950 to 1975 many differences can be seen because in the third quarter of the 20th century Greece had higher rates of economic growth and experienced a rapid growth in the processing businesses sector as well as exceptionally high levels of growth in the financial sector and among service providers, resulting in an impressive increase in the absorption of university graduates by both the public and private sectors.

However, that ‘model’ is now outdated and has led to the current impasse. The public sector, local government authorities and public utility companies have become ‘over-inflated’ because of excess staff numbers, low quality services and low productivity. Moreover, Greek businesses have not developed an international focus, and over the last 20 years have not manufactured value added products or offered value added services, with the result that the country is now in the process of de-industrialisation and of becoming marginalised in the globalised economy.

The following questions therefore arise: what is the future of Greek universities? How can they become a modern Prometheus and a driving force to modernise and internationalise the Greek economy?

With the current outdated development model that exists in Greece, the universities do nothing else except constantly churn out new graduates who will simply end up unemployed. The ‘best minds’ from our universities will go abroad where they will most certainly find work, whereas in Greece the armies of the € 700 generation will grow in size.

It is important to point out, though, that the universities alone cannot change the course of the Greek economy. However, I do believe that they can become a driving force for a more dynamic and internationally competitive Greek economy.

That ambitious target can be achieved if the following conditions are met:

1. It is necessary to cut back on state wastage, and to re-train employees with the assistance of universities in collaboration with specialised consultancy firms, so as to increase productivity at work and provide better services to citizens.

2. It is necessary to have regular evaluations of universities and their staff carried out by recognised bodies in line with international standards. These evaluations should take into consideration the universities’ ability to ensure high quality education for future executives tailored to what is needed by modern businesses and the domestic and international market in general.

3. It is essential to prioritise support for those universities which are objectively proven to have:

· the best performance levels in terms of graduate hiring by businesses, and in terms of training those graduates with the highest likelihood of being absorbed by the market;

4. It is also vital to link regional university and technical school curricula to the future needs of local economies for specialised staff and high added value products which will be based on realistic, long-term regional economic development programmes.

5. The Kallikratis plan for local government reorganisation is also important. One question which arises concerns the human capital that will be utilised to implement this plan for the general administrative restructuring of Greece -which is an aim I fully support. Will the new municipalities, perhaps, be led into decline as they wait for assistance from the state without themselves creating the prospects for development by exploiting the comparative advantages of each municipality in terms of culture, tourism and processing?

6. It is also essential to establish private ‘top-class’ universities via partnerships between large Greek and foreign companies and universities which will bear all investment risks from such educational ventures.

7. Universities must also be obliged to prepare long-term programmes which will include future financial flows for financing and running courses directly associated with the future needs of both markets and businesses.

8. Tax breaks should be provided to companies offering donations to universities to finance specialised courses to meet the future needs of businesses for highly trained executives.

9. Tenure should be abolished, and know-how and procedures should be introduced so that the state and wider public sector become more flexible and promote the best trained employees to ensure better citizen service and the economic growth of the country.

10. It is also vital to limit recruitment in the wider public sector via the Supreme Staff Selection Council (ASEP) to those job positions which require limited knowledge competencies only. Talent cannot be identified via a points system (how many children you have, the locality criterion, how many degrees you have, whether you have many children or are the child of a large family, whether you have three children or are a member of a three-child family, whether you have been made redundant or have resigned from the Phosphoric Fertiliser Industry S.A., etc.) but by recognising skills via constant testing. Our country is suffering because of this. The result is that capable people are migrating to other countries and are making a name for themselves there, while Greece is left with mediocrities. This leads not just to a reduction in our credit rating but also to a drop in the level of services provided to citizens, as the Prime Minister has frequently pointed out.

Given these general concerns, a new role for universities can (and must) be envisaged. They can become a modern Prometheus, centres for creativity and powerful developmental poles.

One thing is certain though. As long as we remain focused on outdated ideas the sooner we will be led to stagnation and to dramatic impasses. 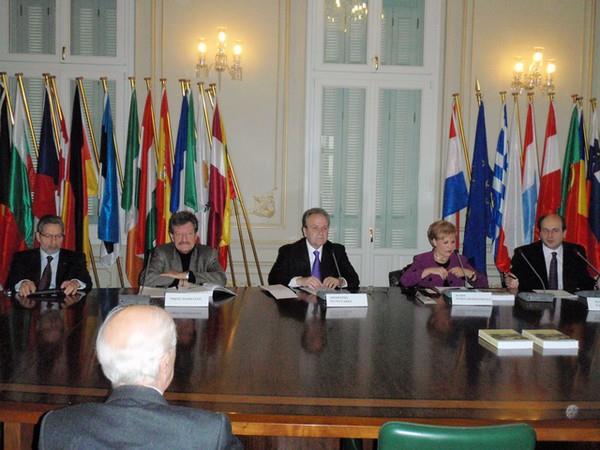