500 Years Of The History Of The Greeks In Naples

On June 5, 2015, the imposing National Archive of Naples, hosted in the premises of the Chiostro del Platano the inauguration of the exhibition "THE GREEKS IN CAMPANIA: 500 YEARS OF HISTORY". 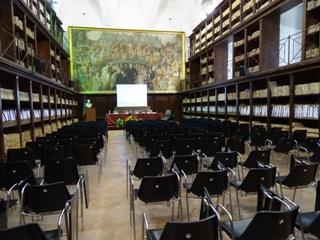 The event concerns the story of the Hellenic Diaspora in Naples and in Southern Italy, one of the most important pages of contemporary Greece and the history of Koroni and Methoni over the ages. Specifically during the period 1532-1534, when the Genoese admiral Andrea Doria, acting under the orders of Charles V and fearing the reprisal of the Turks, evacuated the residents of Koroni, Methoni and Patras, 8,000 Greeks were warmly greeted in Southern Italy. Out of these 5,000 Koronians settled in Naples, others were given shelter and sought their fortune in Messina, Sicily, in Barletta Apulia and in other regions of Calabria.

The imposing assembly hall Filangieri, where the speeches were held, was packed with Greeks, Italians and foreign organizations, interested in the history of the Greeks of the region since 5 centuries ago.

Imma Ascione, Director of the State Archives of Naples, after greeting warmly the assembly, stressed the important contribution of the Greek Diaspora in culture and the close relationship developed between the Greeks and the Italians. She congratulated Professor John Corinthios for his initiative and for his brilliant and meticulous organization.

Michael Kokkinos, Director General of the General Secretariat for Greeks Abroad, pointed out in his address the fraternal ties existing between the two countries and stressed that efforts must continue in order to achieve the prosperity of the peoples.

In his address, Gaetano Daniele, Cultural and Tourist Advisor to the Mayor of Naples, spoke fervently about the Greeks and their struggle in the difficult times of exile. He also mentioned their important offer in all aspects of culture and art. Worth while noting is the reference made to the Greek street Vico dei Greci, renamed during Mussolini's period, to Via di San Tomasso Acquino and his ardent promise to restore the old name, a proposal that caused the enthusiastic applause of the appreciative audience.

Elsa Evangelista, Director of the Conservatory of San Pietro a Majella, with few yet eloquent words referred to the influence of the music of both countries and to the great composers.

Pierre Luigi Campagnano, President of the Jewish Community of Naples spoke of the Greek-Jews who managed to escape from the war in Greece and find shelter in hospitable Naples.

Professor Yannis Korinthios was the keynote speaker. He spoke extensively about the role which the Greeks of Naples and the Italian liberals played in the polygenesis of Greece. He talked about "the diaspora" of the people of Koroni and how they were warmly welcomed by the Napolitans. Among other things, he pointed out how dispersion promotes culture and referred to the great painter Belisarios Corenzio from Kyparissia, who became known as the "Greek of Naples. He also spoke about the Pasha of Ioannina and how he sent some of his subjects to Naples to study medicine and other arts. Among them was Evangelos Mexico. He also made special mention to the great Greeks, patriots and benefactors as Gerasimos Tipaldos and Constantine Triantafyllis (1833-1913) who was the first professor at the University of Naples. He referred extensively to Philhellenism and the "Filiki Eteria" (Friendly Society), he furthermore pointed a letter of a certain nobleman Christos Nikolaidis, where one could read words of ardent patriotism, selflessness and tremendous contribution to his tormented homeland. He did not fail to speak about the great fire of Thessaloniki in 1917, the persecution of the Jews and about the Greek-Archimandrite, Benedict Katsanevas. The detailed speech of Professor Korinthios was unique because he revealed events so far little or not known to the general public.

Then Professor Korinthios, curator of the exhibition, guided the audience through the exhibition halls. The exhibition comprised partly unpublished material, archives dating from 1500 to date, significant videos and recent relics of the Diaspora. Unpublished documents, photographs and projections relating the story of the Greek of Naples and Campania dating from the settlement of the Greek Brotherhood in 1536 to this date were also exposed. The narration includes personalities, such as the painter Belisarios Corenzio who played a significant role in public affairs of both the Greek Community and the city in general. 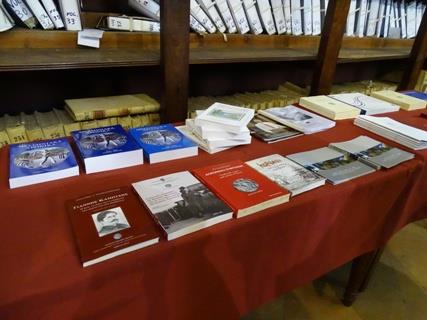 The Maniatakeion Foundation enriched the exhibition with several of its publications most of which are the books of the historian Prof. Andrea Nanetti on the history of Koroni during the Venetian rule (1207-1500) and the way the Venetians ruled Koroni and Methoni, both referred to as the "eyes of the Serenissima”: “Documenta Veneta Coroni & Methoni rogata: Documents Koroni and Methoni, search and review documents of the two main eyes of the Common of Venice (N and O c.): Euristica e critica documentaria per gli oculi capitales Communis Veneciarum (secoli XIV e XV)”. Moreover the book "Koroni, the portrait of a city" by Professor Fotis Litsas, the "Christian Messenia monuments and history of the Holy Metropolis of Messinia" as well as the Proceedings of the 1st International Conference held in Athens and Koroni on 2-5 July 2009 entitled "Historical Memory and Economic Development". Also, a number of the Messinian Annals published by Chr. Reppas.

Among the guests was Nicola Allegretti, Mayor of Brindisi Montagna, a country twinned with the Municipality of Koroni since October 2009.
The exhibition is the first of a series of events scheduled for the next three years to celebrate the presence of the Greeks in the region Campania. An International Conference will follow on June 26, 2015, at the Municipality Hall Naples, Sala del Capitolo, Complesso San Domenico Maggiore, where many scholars of international standing, both from Italy and from Greece will participate. The conference ''THE GREEKS IN CAMPANIA: 500 YEARS OF HISTORY" will involve amongst others George Patoulis, President of KEDE, Dimitris Kafantaris, Mayor of Pylos-Nestoras, Archimandrite Theoklitos Lambrinakis, spokesman for the Metropolitan of Messenia and Eleni Tagonidi Maniataki, Vice Chairwoman of the Maniatakeion Foundation.

Both the exhibition and the conference are under the auspices of the Greek Ministry of Foreign Affairs, the Italian Ministry of Culture, the Prefecture of Campania, the Municipality of Naples, the Central Union of Municipalities of Greece, the Institute of Mediterranean Studies of the Foundation for Research and Technology, the Association of Civil Engineering Province of Naples, the Italian Philhellenic Company, the Italian Institute for Philosophical Studies, the Municipality of Pylos-Nestoras, the Maniatakeion Foundation, the Conservatory of San Pietro a Majella and the Jewish Community of Naples.

The exhibition remains open from June 5 until July 15 and from September 1 until September 30, with free admission. Information for guided tours online at [email protected] For more information: 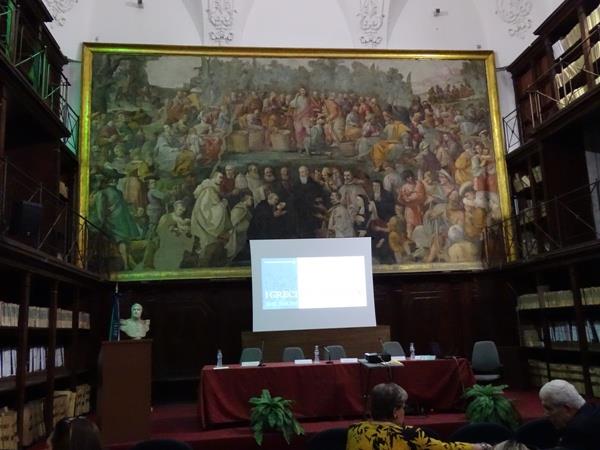 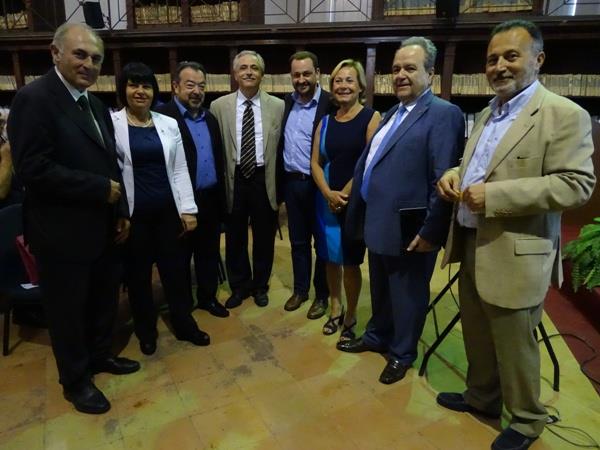 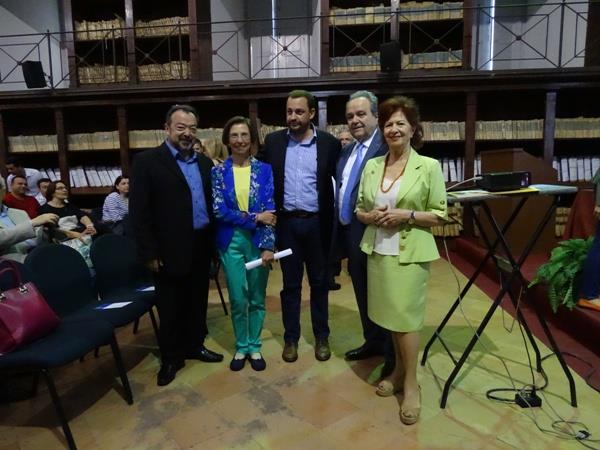 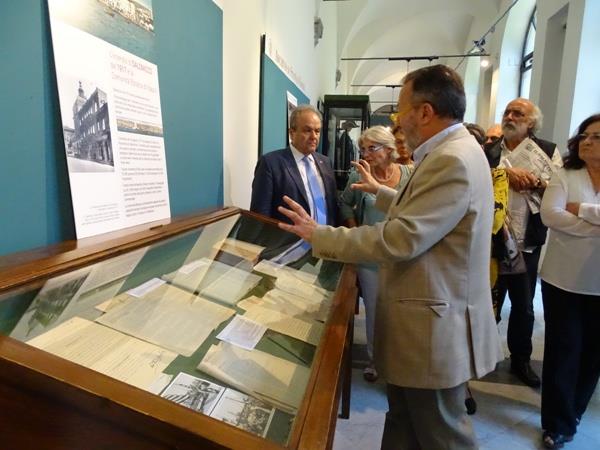 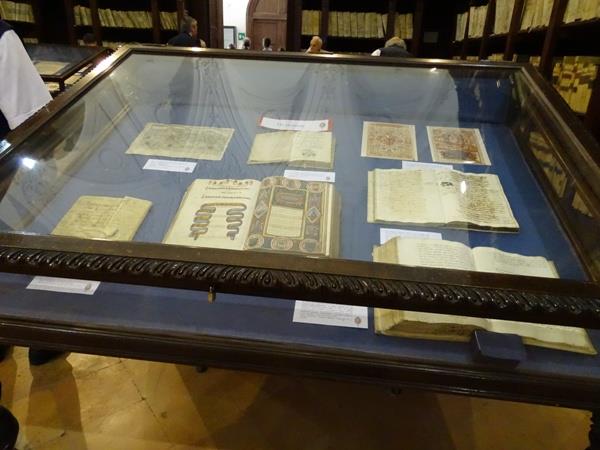 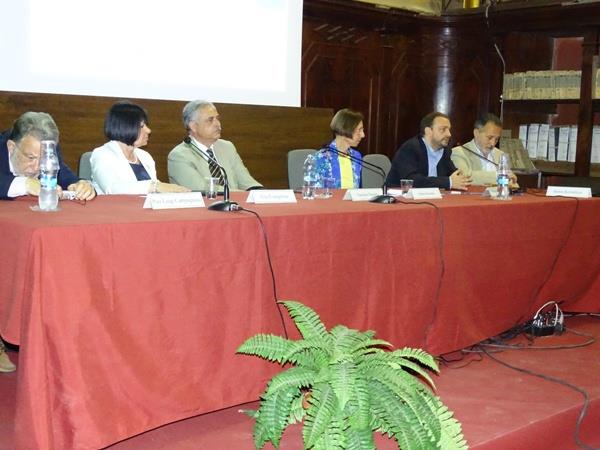